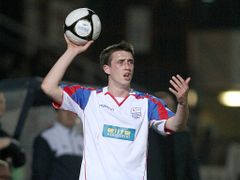 The recruitment drive at Ebbsfleet United shows no signs of abating following the signing of midfielder Michael Corcoran. More >>

Ebbsfleet have confirmed that they will host a Charlton Athletic XI on Sunday, July 28 in their first pre-season friendly at Stonebridge Road. MORE >>

Ebbsfleet United have begun £100,000 worth of renovations at Stonebridge Road as they prepare for life in the Blue Square Bet South. MORE >>

Tom Phipp has become the latest player to buy into Steve Brown’s overhaul of Ebbsfleet, committing himself to the club for the upcoming season. MORE >>

Ebbsfleet goalkeeper Preston Edwards is expecting an exciting 2013-14 campaign after committing himself to the club for the new season. MORE >>

Ebbsfleet United have made Shane Huke their sixth new signing and fourth player to arrive from Dover Athletic. MORE >>