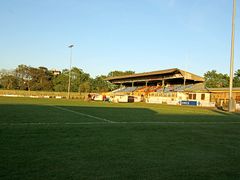 Sutton United have announced the capture of Eastleigh duo Dale Binns and Mitchell Nelson ahead of the new season. More >>

Sutton line up Arsenal and Chelsea

Sutton United have lined up two intriguing pre-season friendlies as preparation for their 2013/14 campaign. MORE >>

England ‘C’ manager Paul Fairclough has named a provisional 16-man squad for the clash with Bermuda in Hamilton. MORE >>

Mansfield Town striker Matt Green has been named the Blue Square Bet Premier ‘Player of the Month’ for April/May. MORE >>

Sutton United supporters have received a welcome boost with the news that the club will not raise their ticket prices for the 2013/14 campaign. MORE >>